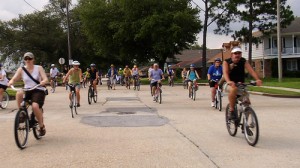 The Levee Disaster Bike Tour is a healthy meaningful way to learn more about the worst civil engineering disaster in the history of the United States.

WHEN: Sunday, May 4, 2014
TIME: 9 to 11 a.m.
WHERE: Departs from City Park
WHY: The survivors of the New Orleans Flood deserve the vetted facts

Beginning at City Park, founder Sandy Rosenthal will lead cyclists along Bayou St. John to the first stop, the east breach of the London Avenue Canal. Traveling along the canal, the next stop is the west breach of the London Avenue Canal. Then, cyclists will ride along Lake Pontchartrain to the 17th Street Canal breach site before heading back to City Park.

The route is designed to follow marked bike routes as much as possible. Cyclists can view the breach sites, historic plaques and the affected neighborhoods. Cyclists will also hear brief discussions on the failure of levees and flood walls designed and built by the U.S. Army Corps of Engineers.

The tour is inspired by Jane Jacobs Walk, a non profit that helps people leave the isolation of their homes to come together to experience the interesting and informative areas of their city outside of the automobile.